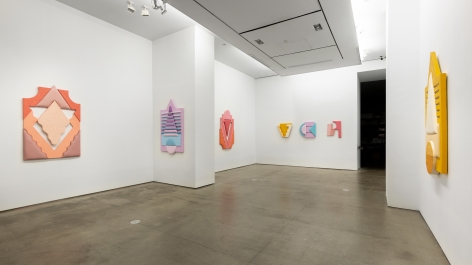 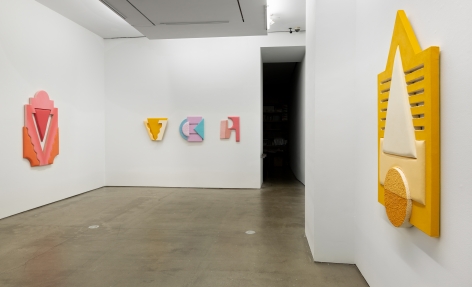 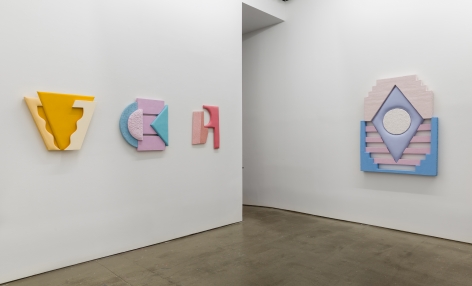 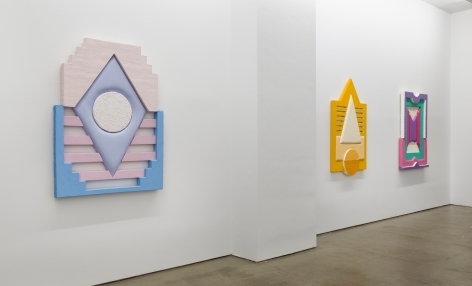 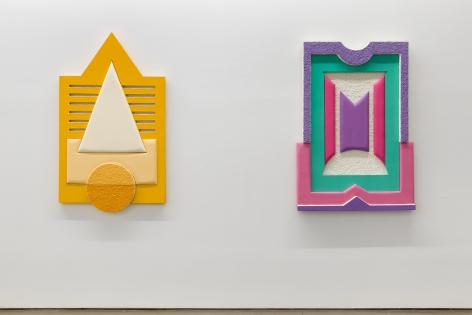 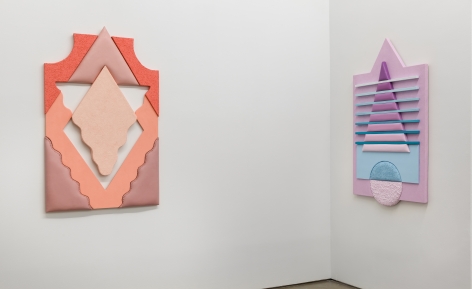 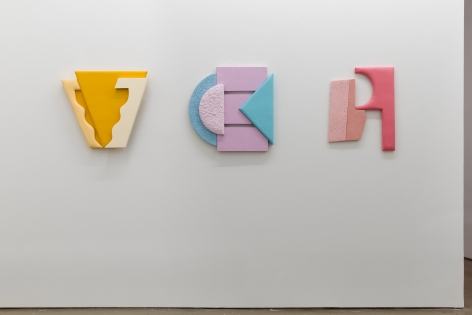 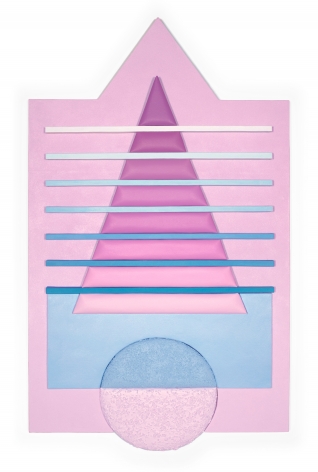 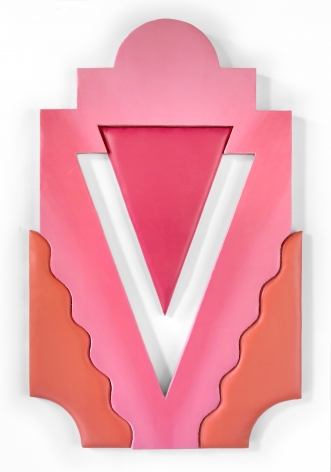 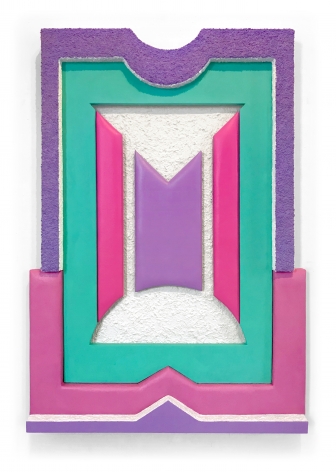 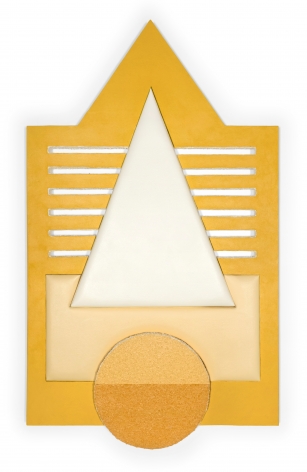 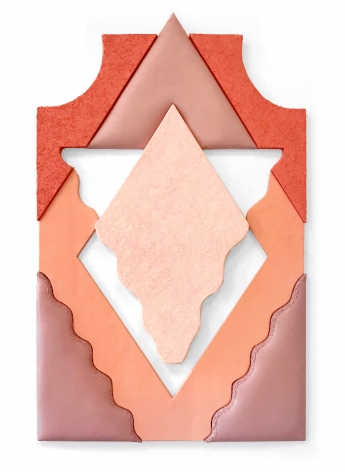 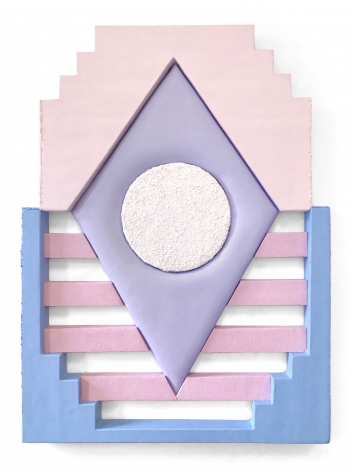 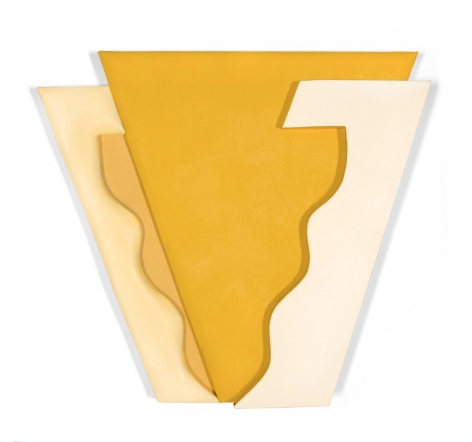 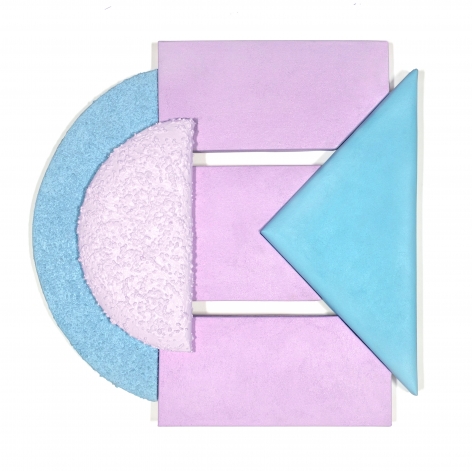 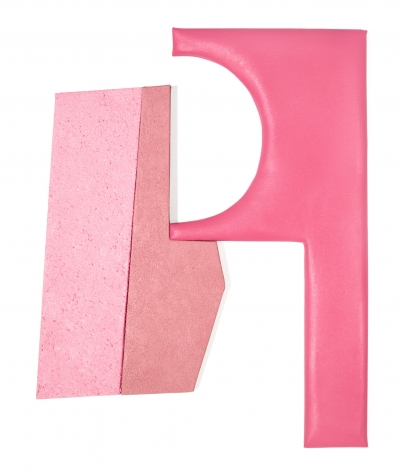 Asya Geisberg Gallery is proud to present "Soft Violence", an exhibition of sculptural paintings by Leah Guadagnoli. With a sparer touch than her prior work, the artist has presented a sort of exaggerated logo, a calling card of absurd proportions, with textured panels, upholstered shapes, and painted canvas uniting to form a streamlined rectangular result.  Whereas her recent work incorporated digitally-printed patterns on fabric and eclectic juxtapositions, this series has a reined-in seriousness that belies gaudy Miami sunsets and remaining hints of "Saved by the Bell", and its heightened simplicity acts as a cohesive statement on abstraction's potential as graphic power. The images seem familiar, but they are a design for a non-existent entity - fully empty, thwarting connection.

Inspired initially by a logo of a local diner, Guadagnoli was attracted to its balanced symmetry, parallel lines suggesting Greek columns, and an "M" whose form had a striking upside-down triangle at its center. She was equally drawn to the multi-layered readings in such a seemingly utilitarian communication: the ubiquitous Greek diner masquerading as high art.  "It seemed like such an epic design for a rather bleak spot", says Guadagnoli. Another influence was the artist's residency in Lamu, an island off the coast of Kenya, where the Swahili architecture reinforced her prior excitement in geometric forms, bright colors, and references to functionality, whether through outdoor seating, resort or beach environments, towels, and hotel decor.

"Soft Violence", the show's titular oxymoron, implies the feminine/masculine polarities that nearly all our ideas insist on - the arena of a mostly-male aggression undermined by softness, an emasculating pejorative. These age-old stereotypes, as prevalent in art as in culture at large, here inspire a third way, a melded neutral ground of aesthetic choices and imbued norms.  Overlaying a hard-edge structure are color gradients, pastel or candy colors, plush curves, and playful vibes. The handmade is palpable - another strike against graphic crispness that our overly-digitized consumption expects. The downward-triangle shapes suggest a guillotine-blade or a vagina - a profound mix that might conjure a Vagina Dentata or at the very least, distract from the prevalence of phallic forms.

Responding to the gendered hierarchy of forms, Guadagnoli flirts with the power of masculine associations. Separate parts protrude outward, with differing depths, denying an easy intake. Ground pumice adds a gnarly texture that refutes adulation of perfect surfaces. Even the flirtation with scale shifts calls to mind a cartoonish exaggeration rather than a need to induce awe, overwhelm, or establish dominance. Guadagnoli thrusts her own language into the arena, and never backs down. As our recent Congress asserts, the meaning of power can bend to allow room for everyone at the table. 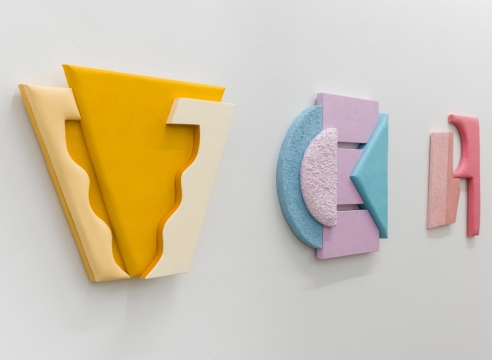 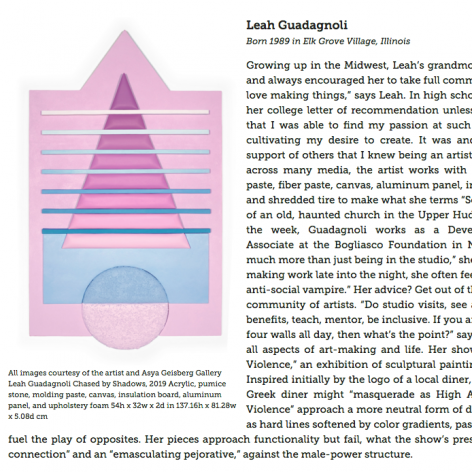 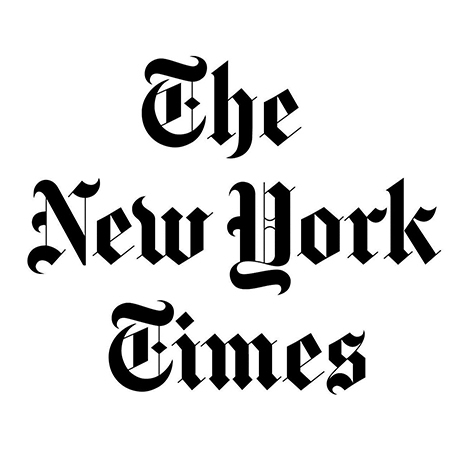 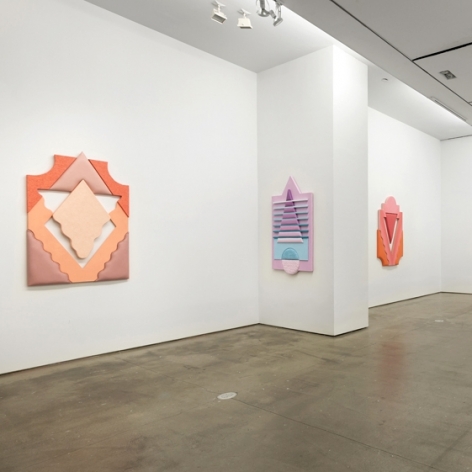 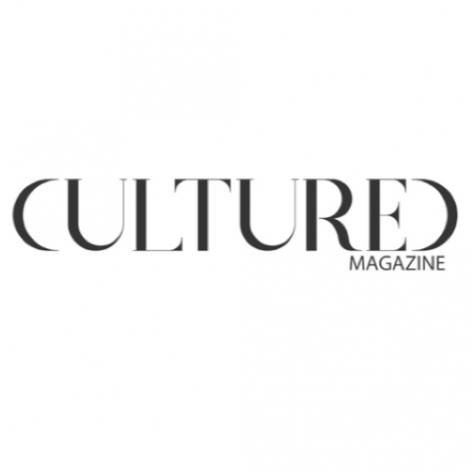