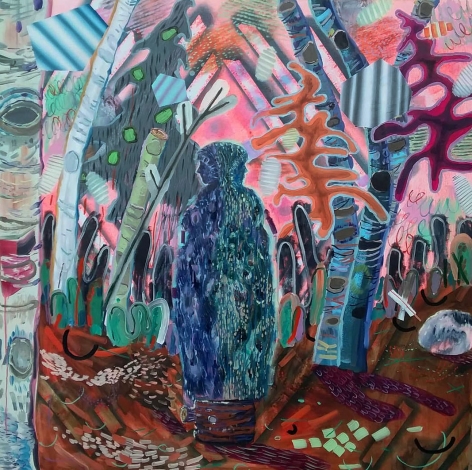 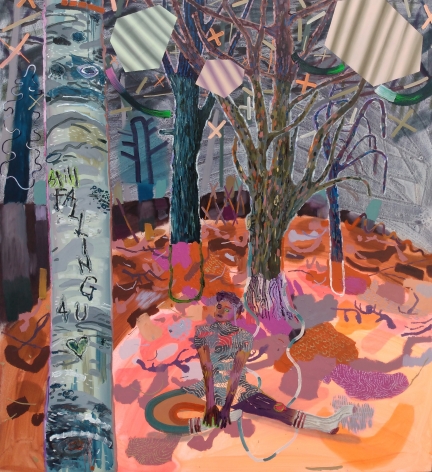 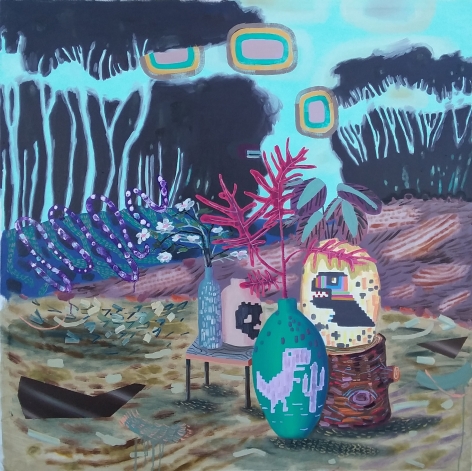 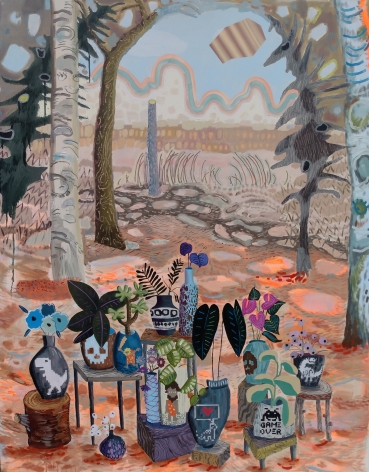 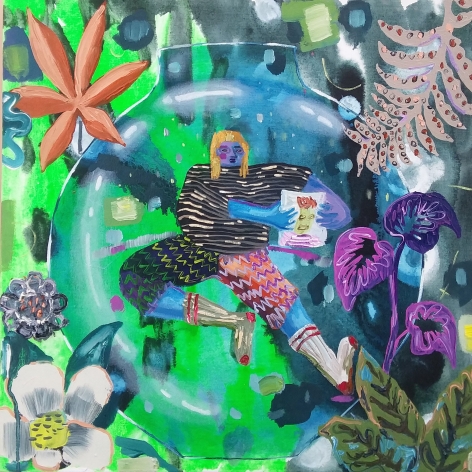 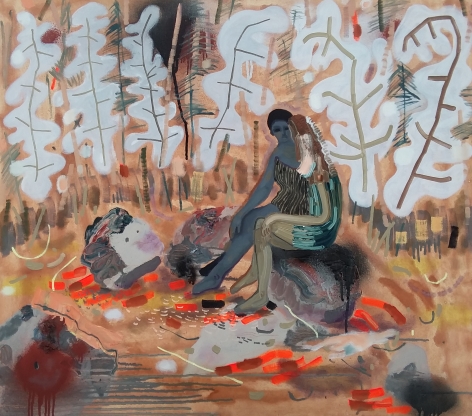 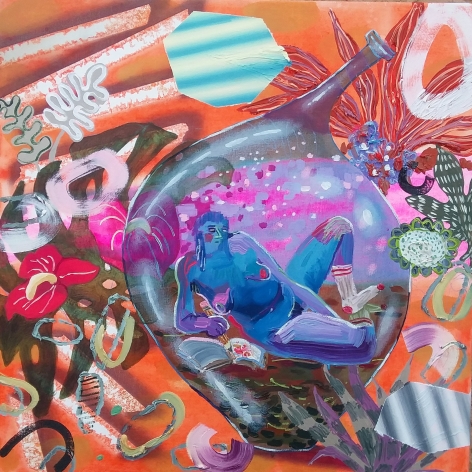 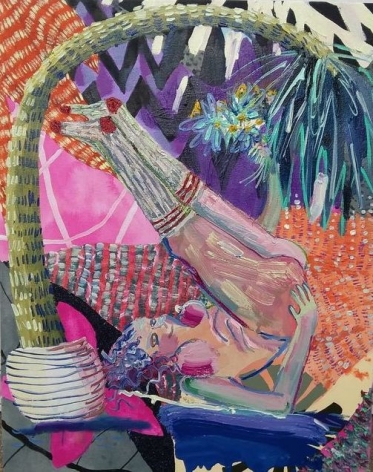 Asya Geisberg Gallery is proud to present “No Man’s Land”, the fifth solo exhibition of Melanie Daniel. As Robin Laurence states in her “Border Crossings” article, Daniel “takes on the dismaying subject of global climate change in a strangely oblique and highly imaginative fashion. Daniel has created futuristic narratives in which human beings struggle to reclaim their lives in the aftermath of environmental disasters; their efforts however, appear to be doomed by the benighted optimism or sheer absurdity of their undertakings.” In her newest series, the artist is still plunging into her idiosyncratic vision of these potential after-effects on people not unlike herself, but the pandemic has provoked a wider net of anxiety about the unplannable. Daniel’s itinerancy has girded her approach to painting: with roots in western Canada, she has studied and lived in Israel, and after several years in the US, with the pandemic brewing, Daniel found herself in a holding pattern of not knowing which border she could cross, when, to return where – a “no man’s land”. The alternating absurdity, nihilism, and angst associated with the pandemic, climate change, and our sense of descent into doom are all alluded to by new symbols, including already nostalgic video game icons of dinosaurs, skulls, and cavemen, or a “Game Over”.

In the painting “Still Falling 4U”, a hyper pink and orange ground curves into a gray sky, bringing to mind acid rain, post-nuclear fallout, or the apocalyptic endless smoke of Cormac McCarthy’s “The Road”.  A woman sits staring past a tree with the painting’s title carved into it – a teen romance of the “before-time” – her eyes blank, perhaps hoping for the understandable past to return, or the vague mist of the future to coalesce. Daniel’s painting strategies disrupt narration while allowing for a cohesion bred out of cacophony, like camouflage. All the elements that have circulated in Daniel’s oeuvre are present– a lone figure in a vast yet manic forest, vividly erupting marks, demarcations, and disrupting polygons, narratives that skew from opaque to the “now” with spray-paint or graffiti. A tree’s outline unfurls into a sock, and its trunk weaves a pattern that echoes the woman’s dress. One leg, curved as if made of rubber, has lost the color and substance of the rest of her body. Like the myth of Daphne transforming into laurel, the woman starts to dissipate into the forest, losing her identity.

“No Man’s Land” is also a parable of women’s primacy in bearing the toll of forced interiority and powering through with urgent resilience. Daniel’s small paintings of women in glass bottles, started before the pandemic began, are prescient. A combination of confinement and protection, the hermetic glass spheres surround each vulnerable tube-socked woman as they gamely carry on their daily tasks. In “Mighty Real”, giant women take over; in “Still Falling 4U”, the elastic limb signifies bending into any shape required.

As the artist states, “I think of the past year and its perpetual changes, hardships and lessons. It was futile to look back, for no past markers or experiences were befitting, and impossible to look forward, to plan for any future; to be shielded by familiarity and habit. We all looked up, down, inside, or mostly sideways to our immediate surroundings, our immediate people. I'm especially drawn to the women, mothers, sisters, friends who sacrificed so much to preserve life's momentum, who were creative and resourceful, when all the usual models were absent. I think of icons falling, and people redefining what mattered to them.” 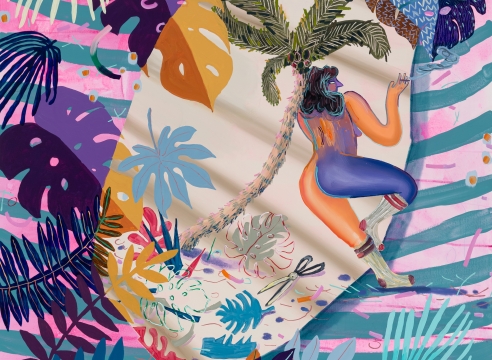