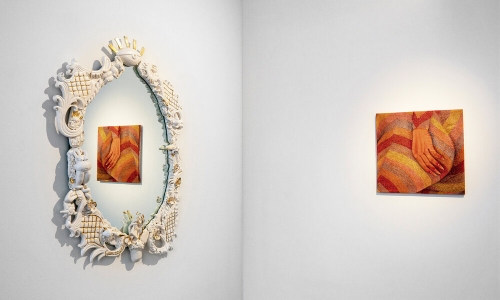 In most group exhibitions, one artwork often shines above all others—to raise its metaphoric voice and say, “over here… look at me.” To step into the nine-artist show Magic Touch at Dinner Gallery (formerly VICTORI + MO), however, is to witness a conversation between the pieces, each working alongside another to contribute to a message of connection. The show’s name is a telling one. Intimacy and fantasy run through the art—powerful elements of magic themselves. And, as was the desire of the co-curators—one of whom being the artist Jen Dwyer—there is a tactile element to all of the works that reveals evidence of the hands that made it.

“I had been wanting to exhibit with a few artists in particular that I’d been a fan of for sometime,” Dwyer tells us, “and I started to think about some of the similarities we had in common in our practice, as well as something that just felt relatable—and the idea of touch.” Dwyer says this is a reference not only to how these artists construct their work (being craft-based mediums or handmade) but also a “silver lining and hope of human touch after the dark cloud that 2020 left.”

Dwyer had the idea in advance. “I chatted with Celine [Mo, managing partner of Dinner Gallery] about it and she said she loved the idea and then we thought about artists that all used their hands to create their works. The idea was also to create a space for viewers to escape for the day—and if they also feel a sense of hope for new things to come, through the feeling of human touch, then that’s icing on the cake.”

“I’ve always respected all of these artists, but never had the opportunity to approach any of them or work with any of them before. This was the perfect opportunity,” Mo says. “We also wanted to create a conversation between more established artists and iconic artists with emerging talent.” The roster includes Dwyer along with Natalia Arbelaez, Donté K Hayes, Roxanne Jackson, Sophia Narrett, Katarina Riesing, Faith Ringgold, Aminah Robinson and Anthony Sonnenberg.

Each piece requires careful consideration and carries a thoughtful creation story. Jackson, for instance, “grew up in a household of animal lovers/collectors. We had somewhat of a menagerie that included various reptiles, rats, exotic birds like parrots and cockatoos, tropical fish and more. When I was eight, my brother Zach gave my mom a pet boa constrictor for her birthday; her name was Hista—named after the python character from the Tarzan books. My brothers fed Hista live prey and I watched as our snake suffocated and then swallowed the mice whole. I saw death and I had to make sense of this somehow—that sometimes an animal had to die for another one to live.” This experience, coupled with lessons from evangelical upbringing (that “certain animals like bats and goats are wicked”) inspired her contributions.

For “Black Flame,” Jackson adds that “My older brother Zach raised chameleons. He died a sudden death, and weeks after this incident I entered his apartment and saw his aquarium of dead reptiles, who died of starvation. I managed to block this memory out until many years later, when I was at the Natural History Museum in Vienna. Walking through aisles of reptiles preserved in formaldehyde behind glass, my memory was triggered once I saw the jars of chameleons. With the most intense recollection, I recalled the scene I witnessed of the emaciated lizards in hyper-real detail. ‘Black Flame’ is a lizard head, split open to reveal an iridescent human skull, mimicking a pearl growing inside a bivalve.”

Together, a mirrored work by Dwyer reflects an embroidered figurative portrait by Riesing. Ringgold’s tapestry and Sonnenberg’s embroidered self-portrait converse despite being in different rooms. Sculptures glance at one another. It’s much like an intriguing dinner party, where attendees fill in the lines of dialogue, knowing—based on the art—that what’s being said is both magical and hopeful.

Magic Touch runs through 1 May.