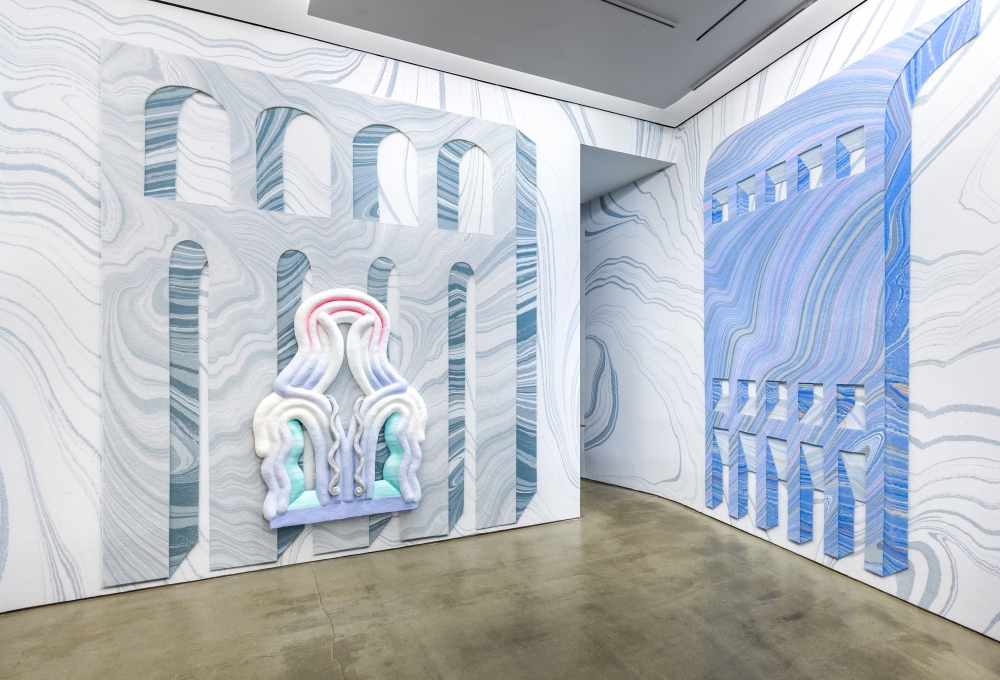 Windows and walls are aswirl in Lauren Clay’s anachronistic realm of optimism. Upon entering, one has the impression of stepping into a giddy loggia populated by bright meringue entities steeped in candy-colored gradients. Angles, apertures, and thresholds are untethered—feints in a watery world where flatness and fatness are equally buoyant. From floor to ceiling the gallery gets the full treatment, plastered with digitally printed enlargements of Clay’s hand-marbleized collages depicting Neoclassical facades. The chatty liquidity of the marbling process is everywhere, skewing conventions of structural rigor. Scale and texture are playthings: When magnified to this extent, the pulpy consistency of the original paper is visually exaggerated, giving the walls the appearance of being felted or even slightly soggy.

Clay’s seven sculpted plaster forms take loose cues from architectural features such as embrasures, and most are named accordingly: windows, screens, a trellis. Though sizeable enough to suggest a kinship with adult human bodies (each with particular quirks), they are not merely anatomical and have an open relationship with symmetry. The swollen amplitude of Fat Trellis (all works 2018) and Narrow Screen is disrupted by skinny curls and serpentine tendrils, while Double Ascending Stair nurses pink tresses in its rolls. These deviations toy with the rotundity of the whole and lead the eye astray.

Four architectonic collages are individually framed and quietly displayed in the back of the gallery; their smallness speaks to interiority in a way that magnitude cannot. Looking at them feels voyeuristic because of their modesty. Here is the world of miniatures, models for great edifices—reminders that most monoliths begin as handiwork.