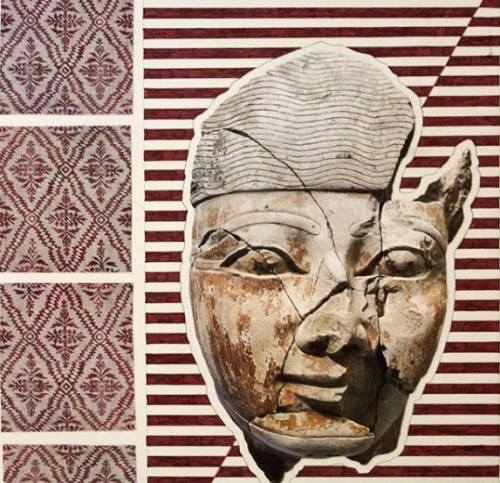 The intersection of A, B and C is bound by repetition, pattern and form. Elements in all three sets of A, B and C mine historic narratives that inform a futuristic fantasy. Hand-drawn and found images allude to Chinese symbols, Egyptian hieroglyphics, Assyrian script and the pagan alphabet; graphic compositions reimagine a language influenced by and connected to modern architecture; and de-constructed geometric abstractions reference Early Italian Renaissance frescoes. The equivalent of all elements contained in sets A, B and C is <3.

Alternating between the hand-made and found images, Matthew Craven (A)reconfigures original historical narratives by fusing hand cut imagery from history textbooks onto backgrounds of geometric symbols and textile patterning, meticulously drawn on the reverse sides of vintage movie posters and found paper. Obsessive repetition of color and motif join contrasting thoughts to create a surreal vernacular built on transformation, precision and vibrancy. Placed within this new symbolism and meaning, the found images lose their original context and carry on within a newly imagined, temporal.

Benjamin Edmiston’s (B) sophisticated abstract paintings and drawings favor restraint over abundance. Geometric compositions with an identifiable hand painted touch, Edmiston’s work uses the language of architecture as impetus. Intimately scaled paintings resonate with flat, bold color or (in many cases) black and white. Each are direct and confrontational, yet simultaneously leave space for the viewer to wander.

Alison Hall (C) lives and works in Brooklyn, NY, and Martinsville, VA. Hall looks to the ritual and repetition of her upbringing in rural Virginia, tempered with a devotion to early Renaissance artifacts in central Italy. Drawing on her ongoing study of patterns in the Arena Chapel’s fresco cycle by Giotto (Padua), Hall searches for visual systems in 13th century ceilings, floors and paintings. She de-constructs these – such as Giotto’s eight pointed asterisk constellations, diamond shaped grids and six pointed mosaic stars – conjuring her own geometric abstractions. Floating reflective graphite patterns over dense fields of oil pigment laid over sanded plaster, Hall imbues these ritualistic rhythms with subtle movements and patterns. When she breaks from these, it reveals the surreptitious presence, like a tracking marker, of her hand, in the midst of rigorous abstraction.