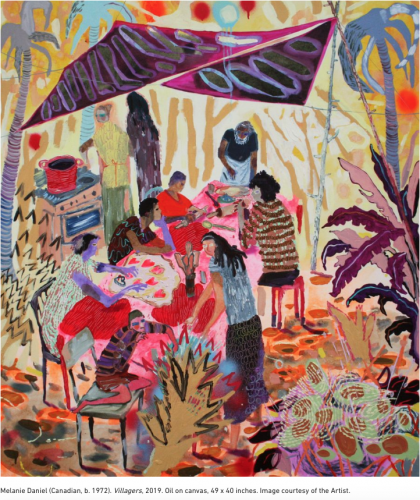 Melanie Daniel’s fear for humankind’s relationship with the natural world has fueled the paintings and works on view in Melanie Daniel: Only Four Degrees, her Michigan Artist Series exhibition at GRAM. In these recent large-scale paintings and works on paper, Daniel imagines a world at the brink of collapse by our chronic, longstanding disregard for its well-being. The people who populate her rich narrative pictures are painfully aware of their difficult circumstances and have adopted various methods to cope with their new surroundings. Daniel’s garish, unnatural palette, dense areas of vibrating pattern, and skewed perspectives underscore the uneasy relationship between the subjects and their environment.

The figures in her paintings and drawings still attempt the mundane tasks of daily life, but in a world inhospitable to normal routine they appear unmoored. In Villagers, a group gathered beneath an outdoor tarp prepare food. Instead of a bucolic picnic, the scene seems more a desperate attempt to maintain a semblance of normalcy. In the painting Only Four Degrees, a lone figure within a post-tsunami landscape futilely attempts to create a power source, or perhaps to make contact with others. In these works, the specific aims of Daniel’s protagonist are ambiguous, and often humorously hopeless. Daniel’s big, brash, and strangely beautiful works are both cautionary, yet hopeful, in that their protagonists demonstrate the will to adapt and survive. The works show, too, the resilience of nature, in which plants and flowers threaten to overrun the canvases. It is possible that our planet will become inhospitable to human life, but nature will find a way to survive.

Throughout its 100-year history, the Grand Rapids Art Museum has featured the work of Michigan artists in its exhibition program. This tradition is now formalized into the Michigan Artist Series, to be presented in galleries throughout the Museum, which highlights the work of living artists or designers working in diverse media who reside in the state.