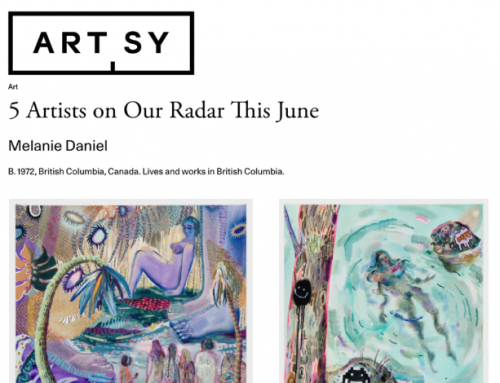 5 Artists on Our Radar This June

“Artists on Our Radar” is a monthly series produced collaboratively by Artsy’s Editorial and Curatorial teams. Utilizing our art expertise and access to Artsy data, each month, we highlight five artists who have our attention. To make our selections, we’ve determined which artists made an impact this past month through new gallery representation, exhibitions, auctions, art fairs, or fresh works on Artsy.

The artist Melanie Daniel highlights the fraught relationship between the environment and humans in “No Man’s Land,” a dystopic new body of work on view at Asya Geisberg Gallery through June 26th. Daniel creates futuristic scenarios in which human beings struggle to recover their past lives after a major climate disaster. Figures are languid in acid-colored forests; trees melt and transform into tube socks; limbs turn translucent as if the subjects are dissolving into the earth. The artist’s colorful post-nuclear vignettes often feature women as the main characters. “I’m especially drawn to the women, mothers, sisters, friends who sacrificed so much to preserve life’s momentum, who were creative and resourceful, when all the usual models were absent,” Daniel has said.

Thanks to vibrating patterns and skewed perspectives, Daniel’s canvases are flooded with tension, yet at the same time convey glimmering signs of hope that celebrate women’s beguiling resistance. In The Journal (2021) a hermetically sealed woman captures her feelings; in Tube Sock Sexy (2021), a smiling woman stretches in a yoga-like pose.

Daniel received her BFA and MFA from Bezalel Academy in Israel 1999 and 2006, respectively. Since 2014, she has been showing with the Israel-based Chelouche Gallery, where she has had multiple solo and group shows. In 2021, Daniels will have a solo show at the University of British Columbia. Her work was also recently featured in the group exhibition in “Fairyland” at Mindy Solomon Gallery in Miami, where she also had a fall 2020 solo show, titled “After the Flood.”