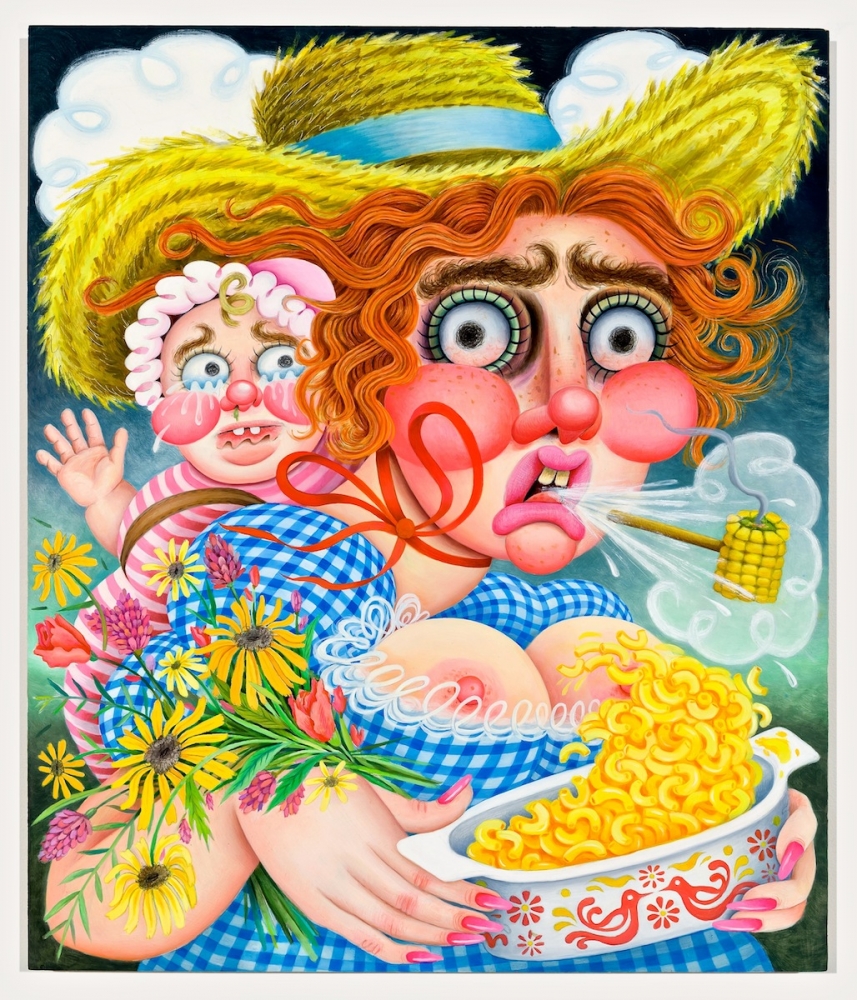 "Paintings Where Women Punch Back"

Rebecca Morgan has absorbed the basic tenets of Neoclassical drawing and applied them to raunchy, sexually explicit subject matter, something you cannot imagine Nicholas Poussin or Jacques-Louis David ever doing.

During the past decade, the terms “identity” and identity politics” have become as central to characterizing an artist’s work as “formalist” was for an earlier generation. Often, they are applied to work done by artists of color, or other artists who have traditionally been marginalized in America society. However, what if you are a white woman artist from what many might consider one of the cultural deserts of the American landscape? Can the term “identity politics” still be relevant? That question came up for me when I was looking at the works in the exhibition Rebecca Morgan: Town and Country at Asya Geisberg Gallery (September 12–November 2, 2019).

Another question that came to mind was, what roles do geography and locale play in the formation of one’s identity? In America, someone who is white can choose to assimilate into mainstream society, which emphasizes forgetting or marginalizing your origins, or literally forgetting where you came from because America is where you belong. Suppose you refuse to accept that possibility and choose instead to remember your origins? Can you do this without becoming nostalgic, sentimental, corny, patriotic, or insular?

An artist whose work gets us to think about these questions is doing something noteworthy, which is certainly the case with Morgan. In an interview with Leah Oates in New York Arts Magazine from May 4, 2011, Morgan stated:

"I am from a conservative farm town in Western Central Pennsylvania, in the Allegheny/Appalachian Mountains. I grew up with a very limited scope and basically non-existent understanding of art and its precedents, even though I drew still lifes with my grandfather and took Saturday art lessons. I was always making or drawing something, using it as an outlet to cope with banality. Claiming any kind of creative profession was never a conversation; the lack of knowledge or exposure, in retrospect, was crippling, and in many ways, I displace the blame on the backwoods environment I lived in."

Instead of assimilating into the art world and making her figures inhabit an urban environment, Morgan depicts social types long mocked by the mainstream media. Morgan’s hillbilly characters are the not-so-distant cousins of the poor citizens of Dogpatch, the fictional village found in the long running syndicated comic strip, Lil Abner(1934-1977), and the less fortunate friends of the Clampett family, who were the central characters on the popular TV comedy, The Beverly Hillbillies (1962–71). The primary difference is that Morgan’s figures are more unselfconscious, rotund, raunchy, uncouth, loony, and scandalous than their mainstream counterparts. A dark satirical streak runs through her work. Yet — and this is what got my attention — she does not feel at all superior to her subjects, something she signals in the very first work you see when you enter the gallery.

In the watercolor, “Self-Portrait Painting a Sluggin’” (2019), the artist depicts herself wearing a straw hat, plaid shirt, and jeans sitting at an easel. To her right, we see a young woman with her breasts peeking over the top of her dress punching a hapless man in the mouth. Morgan has mastered an illustrational style in this work, which she uses occasionally in this exhibition. This also got my attention because it became clear to me as I looked at her works in other mediums (particularly drawing and printmaking, the latter of which is new for her) Morgan has not packaged what she does into a style. While her influences may have included comic books, MAD magazine, which she told Oates her father had, and the cartoonist Robert Crumb, she works in a very different way in her prints and drawings than in her watercolors and paintings. And I have not even gotten to her ceramic and brass sculptures.

For one thing, the prints are more linear, and Morgan has paid a great amount of attention to articulating single strands of hair and the edges of shapes. This suggests that she allows herself to be guided by the medium. In the graphite drawing “Panty Stealers (After Diana and Actaeon)” (2019) — at a little more than 7 feet by 6 1 1/2 feet, by far the largest work in the show — Morgan’s tonal shading, distinguishing one form and surface from another, looks like it has not been reworked; tree bark, bulging belly, and hair sprouting from skin have all been carefully attended to with remarkable control. This control is also evident in her paintings “You Can Have It All” and Predator Swing” (both 2019).

Morgan can be snarky and empathetic at the same time. Her combination of bawdy subject matter and deft caricature with clear drawing and precise gradations of shading culminates in wonderfully funny, art historical contradiction. She has absorbed the basic tenets of Neoclassical drawing and applied them to raunchy, sexually explicit subject matter, something you cannot imagine Nicholas Poussin or Jacques-Louis David ever doing. By working in this manner, while acknowledging the influence of place on her subject matter, Morgan deliberately collides a high, serious style with her low-brow subject matter, essentially rendering the distinction moot. Moreover, instead of focusing on the political incorrectness of her characters’ behavior, she celebrates their impolitic actions as she defines a funny, wayward world where women can punch back.

Morgan’s attention to detail and surface also manifests in her ceramics, which are inspired by face jugs. Face jugs in America have been traced back to African slaves working in pottery factories in Edgefield, South Carolina, in the decades before the start of the Civil War. Look at the surface of her face jugs — the grooved coils of hair, the pockmarks and pustules — and you’ll see how she has gone over every inch of the surface, both in the way she has worked it and in the color of the glazes.

In her subject matter, Morgan shares something with Matt Bollinger and Brandi Twilley. While they come from fly-over states or cultural locales not thought fit for art, they have refused to forget their origins or how they became artists; at the same time, they have rejected both nostalgia and victimhood. Morgan’s work is unapologetic and in your face, which is right where it belongs.