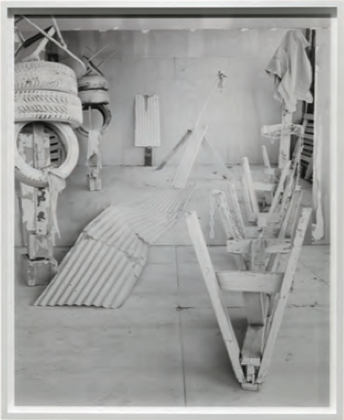 For the Chilean-born artist Rodrigo Valenzuela, physical and artistic labour have always been intertwined. After moving to the United States in 2005, Valenzuela worked for a decade in construction while he developed his artistic practice. These jobs influenced the production of several experimental videos documenting fellow workers: in Maria TV (2014), for instance, Valenzuela combines interview footage of Latinx nannies and maids with sequences in which they perform telenovela monologues, enacting their real-life frustrations through dramatic dialogue. For a 2015 exhibition at Seattle’s Frye Art Museum titled Future Ruins, Valenzuela paired these videos with the black-and-white photographic series Hedonic Reversal (2014), depicting decaying architectural structures. They are faked, however: Valenzuela made the images through a painstaking process. He constructed scenes of destruction in his studio, photographed them, created digital scans of those images as backdrops and assembled further objects in front of them, accompanied by dusty footprints and scrawls of chalk and graphite.

Future Ruins, mounted in a gentrifying Seattle, evoked Robert Smithson’s 1967 characterisation of the New Jersey Turnpike as ‘ruins in reverse’. In his catalogue interview for the exhibition, conducted over a year before President Trump vowed to ‘Make America Great Again’, Valenzuela explained his inte est in artificial ruins: ‘I am not seeking to symbolize loss and nostalgia for a better past; I’m seeking to understand if there is pleasure in the ruin itself ’.

General Song takes a more prosaic and politicised tone. Its title draws on Pablo Neruda’s volume of poetry narrating the history of the Americas from a Latinx perspective. In the main gallery space, Valenzuela shows seven photographs from the Barricades series (all works 2017), based on research of historical uprisings. Like the Hedonic Reversal pictures, these are near-human-scale prints of faux ruins assembled in the artist’s studio. The images, however, are more sombre and straight-forward; they are printed in muted, silvery tones, and lack the stark contrast of the earlier work. Plywood two-by-fours, tyres, chains and bricks are scattered across these new anarchic compositions, evidence of apparent unrest. His photographs of the scenes are mounted or wheat-pasted on boards in the background of the images, with reverse constructions staged in front of them.

The fact that there is no reflection of the photographer in what appears to be a ‘mirror’ at the back of the image is immediately striking. Remarkable, too, is Valenzuela’s eye for poetic detail in everyday materials. In Barricade No. 2, for example, a piece of corrugated metal on the ground stretches forward and backward – in the ‘real’ foreground and replicated background – like a flowing river. In Barricade No. 1, Valenzuela paints a scafolding grid – in his words from the Future Ruins catalogue, ‘the quintessential structure of the everyday that the working class builds’ – on the background, and ersatz shadows on the floor.

On a wall adjacent to the photographs, Valenzuela shows the seven-minute slow-motion video Meditations on Land (2013). Here he trades the documentary conceit of his earlier work for full-on theatricality. The artist himself appears as a shirtless Colossus moving mounds of dirt, a nod to Goya’s painting El Coloso (1808–12) of a giant as allegory for Spanish fortitude in the Peninsular War. Elevating the artist to the status of mythic hero, Valenzuela’s video offers an odd counterpoint to the photographs. Where the Barricades subtly evoke themes of displacement, political deceptions and economic precarity, the video animates art history, turning the toil of war into a symbol. Valenzuela’s work is most successful when it refuses such a divide between material reality and its representation.