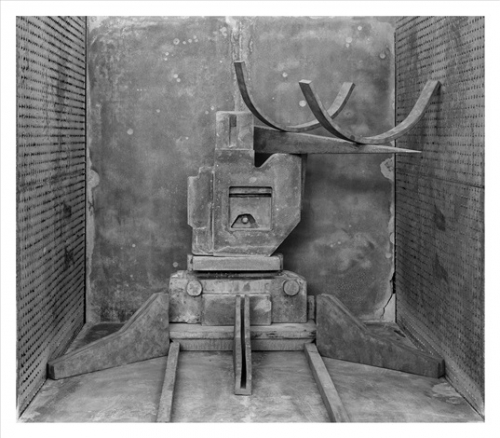 Rodrigo Valenzuela's creations have more complex implications than you might expect.

In the world of small children, cardboard boxes are known to exert a powerful allure—perfect for constructing living room forts, playing hide-and-seek, and generally serving as three-dimensional canvases for creative expression. For most of us, that box-inspired enthusiasm eventually dies away. But for Chile-born, Los Angeles-based artist Rodrigo Valenzuela, packaging materials remain a source of magical potential.

To create his latest series of photographs, currently on view in “Present” at Upfor Gallery in Portland, Oregon, Valenzuela turned his studio into a theater-like space where he created, staged, and then photographed what he calls his “performances for the camera”—constructions made from discarded packaging that he had cast in concrete and clay.

Valenzuela, who has a background in performance art, has often focused on the overlooked aspects of the everyday American landscape in his work, and this case proves no exception. At his studio in downtown Los Angeles, Valenzuela culled his materials from the garbage of nearby stores selling electronics and audio equipment. “The packaging forms that I used as molds for the concrete were left in dumpsters or on the street,” he explained. “I like to work with what is at hand and I’ve done this for a long time.”

In the photographs, these constructions—which are formed without adhesive, balancing in place—conjure up disparate and often incongruous associations, from Latin American Brutalist architecture to medieval torture devices. Some of the structures also evoke the name he sometimes uses to describe them: “monsters.”

But Valenzuela warns against getting too caught up in specific, static associations or references. He often deconstructs his creations and then reassembles them later on—the ability to play with the discarded objects of capitalist society creates essential and radical possibilities.

“Concrete is the basic building block (pun intended) of most institutions of capitalism. It is the basic structure of this series as well. We have created institutions out of a collective necessity. We can also take them apart and restructure them to serve us,” Valenzuela said. “There is a certain porosity and malleability in this work, physically and conceptually, I wanted to make so people could think with rather than about the work.”