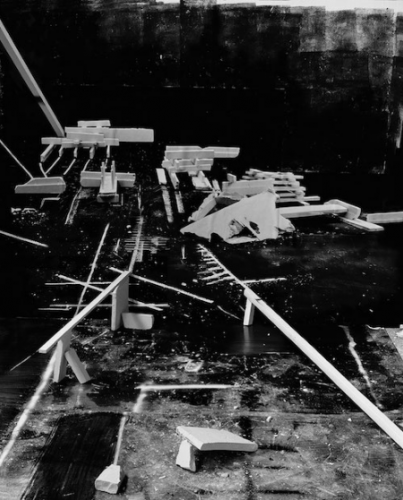 This lively show is a roll call of sorts, representing the thirty-six participants in the Drawing Center’s most recent residency program. Many of the artists work at the outskirts of drawing. Thessia Machado’s “Pitch & Yaw” is an ongoing mechanical performance: two motors with graphite tips jerk around on wires, covering a sheet of paper with feathery arcs. From afar, Rodrigo Valenzuela’s moody, architectural compositions could be mistaken for charcoal abstractions; viewed up close, it becomes apparent that they aren’t drawings at all but, rather, black-and-white photographs of miniature ruins, built from studio detritus. Other artists commit to tradition, including Jennifer May Reiland, who draws with a vengeance. Her exquisite bird’s-eye-view tableau “Encierros” depicts the dense activity radiating from a bloody bullfight. Eric Ramos Guerrero employs a lush, Raymond Pettibon-ish realism to depict transfixing dystopian scenes. In his “Anhedonic,” a fully clothed figure stands on a diving board, looking up to the sky, where smoke spells out “I know it’s over.”