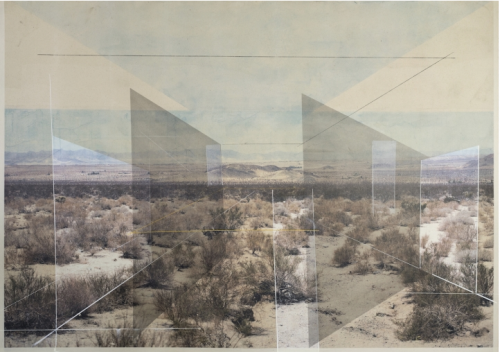 Using a multi-step photocopying process, Valenzuela projects abstract lines onto unpeopled desert scenes — hinting at houses, governmental offices, and memorial structures yet to be built. Valenzuela’s labor-intensive practices reference the paperwork-heavy process of applying for citizenship in the US, with which he’s directly familiar. He’s now a professor with permanent residency, but when he first moved to the US in his 20’s, he was an undocumented construction worker. He spoke to Hyperallergic about growing up in Chile during the dictatorship of Augusto Pinochet, reckoning with the troubling histories of beautiful landscapes, and reconciling the idealized American Dream with the realities of life as an undocumented person.

Tell me about the process you used to make the series Sense of Place.

I document landscapes with black-and-white film, and then print them with photocopies and make image transfers. It’s all a metaphor for bureaucracy. I remove layers of paper with my fingers and a toothbrush and some sponges, so that only some of the toner makes its way into the canvas.

It’s a very labor-intensive process, and it’s work, just like how landscaping is work. To me, making art is a way of making essays. I think through images — visually and materially. I would write if I could, because it would be way cheaper.

What about Joshua Tree and the Atacama desert drew you in? And why do you layer ink blocks and pencil-thin lines over each landscape scene?

The desert can be interpreted as a place full of possibilities — but also emptiness. My photos of the Atacama desert are abstract: the lines project into the sky or get lost into the darkness. It’s a heavy place, for the altitude and the out-of-this-world feeling, but also for its history: there are bodies buried there from Pinochet’s military dictatorship. I made minimal gestures. I enjoy projecting possibilities about what the landscape could be while still leaving the lines abstract, in a way cutting the dream short. I want to leave the picture up to interpretation, and the dream unfinished.

The history of landscape painting is about male domination. Most of the romantic paintings we encounter from the 19th century, for example by J.M.W. Turner and John Singleton Copley, contain a Western mentality of conquering nature and a sense of entitlement to land ownership. As an immigrant or Latino or poor person, I have different fantasies. We day laborers work on the land, but we do not own the land. In painting culture, you are the owner of the landscape.

I considered how protest is a combative way to rebel against imperialists or oppressive forces. The landscape feels like a quieter and more poetic place to think about civil disobedience, and to get into the poetics of being a dissident.

Since I was 24 or 25, I’ve been taking photos on trips, so I have a big archive of landscape images that I keep coming back to. And I keep taking more photos. I find that the beauty of the landscape is not always conducive to the conversations I want to have about immigration and desire.

What is your citizenship status now?

I was undocumented for a long time. Ten years ago, I was waiting for work at Home Depot — working construction and for moving companies — and now I’m a permanent resident, a green card holder, a professor at UCLA. What happened to me doesn’t happen to a lot of immigrants.

One day I’ll become a citizen, but for now, I like keeping my Chilean status. There’s something about holding on to your past that is nice. I grew up in Santiago and the weather in Los Angeles does make it feel like home. Downtown LA feels exactly like the neighborhood that I grew up in, Barrio Brasil. And there’s a lot of Latinos. I can go the whole day in LA without speaking English.

You grew up in the 80s, in the shadow of Pinochet’s dictatorship. When did you learn that there were missing people, and even bodies buried, in the Atacama desert?

It’s just part of the collective consciousness in Chile. When Allende became president, he nationalized a lot of the copper mines in the Atacama desert that were owned by American companies. The US government was motivated to stage a coup, then, and to elect Pinochet. So the Caravana de la Muerte (Death Caravan) happened because Pinochet was the president — which happened directly because of money from the American government.

When you go to the Atacama desert now, it’s beautiful and magical and looks like a place from a different planet. There are observatories where people — lots of Americans and Europeans — are looking to the stars. At the same time other people, mostly Chileans, are looking toward the ground. Because the situation was never resolved, many families are still looking for their loved ones.

Image: Rodrigo Valenzuela, “New Land No. 3” (2017, courtesy of the artist and Upfor Gallery)