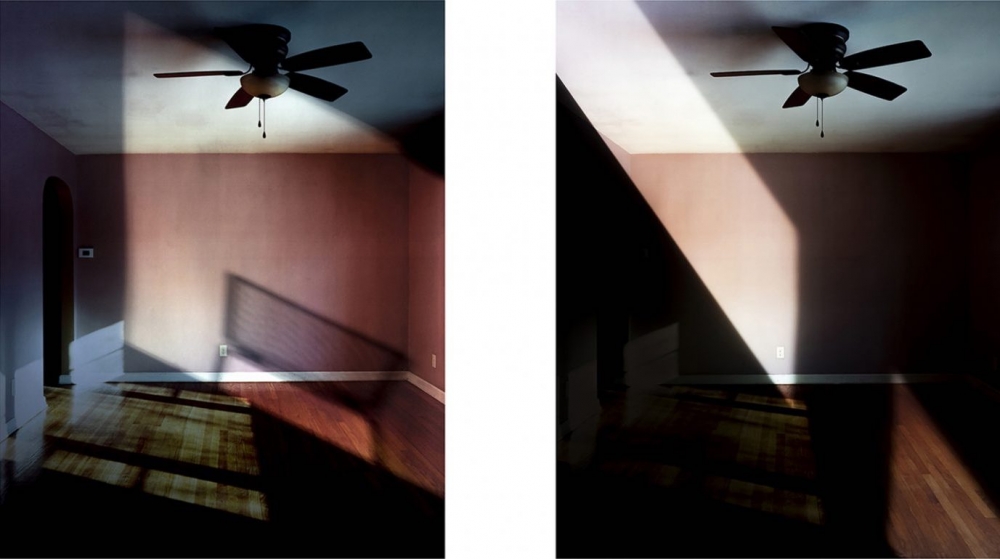 The exhibition House & Universe brings together work by 8 artists working across various media. The exhibition takes its title from a chapter in the book The Poetics of Space by French philosopher Gaston Bachelard, in which the author contemplates an experiential understanding of home as both a domestic environment and a place where imagination finds sanctuary. Bachelard considers “the house as a tool for analysis of the human soul,” drawing a parallel between the arrangement of objects in a house, and the ability of a person to think, visualize, and imagine.

The relationship between materiality and domestic referent idea is explored by Claire Sherwood, Deborah Zlotsky, Todd Kelly, and Mimi Young. Zlotsky’s use of reclaimed vintage textiles, scarves, doilies, and blankets, is a tangible embodiment of the domestic feminine space of generations past. Claire Sherwood creates intimate rock-like sculptures using the negative space around her body as template, employing banal materials from everyday life like swept dirt from daily chores, or items found in the recycling bin. Todd Kelly’s iterative constructions are similarly comprised of a list of non-traditional materials. Each successive piece, based on the past and the future, creates an infinitely expanding universe, complete with the occasional cut-out portal. Mimi Young’s work is informed by memories of the banal and commonplace objects around her, creating a lyrical language of recycled shapes and gestural lines.

Jiatong Lu’s photographs create a sense of escape from daily circumstance by transporting the viewer outside the immediate world. Lu considers the memory of home as a traumatic space from which to escape. Lu’s photographs follow the fragmented and painful experiences of childhood, and in doing so explore themes of intimacy and isolation.

Gabriel Zimmer, Tania Alvarez, and Sean Corcoran react to their interior surroundings in different but equally resourceful ways. Zimmer creates striking still life photographs, taking unremarkable objects and juxtaposing them into vibrant visual puzzles. Meanwhile, Alvarez explores memory through a series of painted interior spaces. As a group the paintings tell an autobiographical story about the isolation of living with chronic illness, and the shared human experience of being alone. Corcoran employs a mix of analog and digital photography techniques in order to investigate themes of space, object, and home.

Through various means, the artists in this show each affirm that the spaces we seek, create, or privately inhabit can unfold into expansive worlds unto themselves. In a time of unprecedented and necessary interiority prompted by the pandemic, this exhibition offers a sympathetic vision: a call to cultivate a universe of connotations and expansive associations within the seemingly finite environment of the home.

Tiger Strikes Asteroid is a 501c3 non-profit network of independently operated, artist-run exhibition spaces with locations in Philadelphia, New York, Los Angeles, Chicago, and Greenville, SC. Their goal is to collectively bring people together, expand connections and create community through artist-initiated exhibitions, projects, and curatorial opportunities. They seek to build an ethos of cooperative achievement in the visual arts, creating the physical and emotional space for artists to show their work and exchange ideas on their own terms. Their artist-run model expands the artist’s role beyond that of studio practitioner to include the roles of curator, critic, and community developer and provides an alternate model to the conventions of the current commercial art market.
Since the founding of their Philadelphia space in 2009, they have shown almost 1000 artists in about 250 exhibitions and projects. Their exhibitions and projects have been featured in numerous print and online publications including The New York Times, ArtForum, Art F City, Hyperallergic, The Huffington Post, The New Yorker, The Brooklyn Rail, Whitehot Magazine, The Philadelphia Inquirer, the artblog, WHYY, Sculpture Magazine, 60 Inches From Center, Chicago Gallery News, LA Weekly, Two Coats of Paint, Artinfo, and Artnet News.

Yael Eban is an Israeli lens-based artist who lives and works in Brooklyn, NY. She earned an MFA in Photography & Video at the School of Visual Arts in New York. Her work has been exhibited most recently at Stellar Projects (NYC), FJORD (PA), Center for Creative Photography (AZ), The Chrysler Museum of Art (VA), and Houston Center for Photography. She has been featured in Hyperallergic, Artsy, Collector Daily, and FADER. Eban has attended residencies at MASS MoCA, Wassaic Project, and Vermont Studio Center. She is co-director of the NYC branch of Tiger Strikes Asteroid, a non-profit network of artist-run spaces.

Jackie Hoving lives and works in Brooklyn, NY.  Her large scale wall installations incorporate painting, printmaking, wallpaper, animation and collage. Hoving’s work has been featured  in solo projects  at Trestle Gallery in Brooklyn, Ripon College in Wisconsin, Rebekah Templeton Gallery in Philadelphia, The Philadelphia Airport and group exhibitions at the Artist Run Art Fair in Miami, Storefront Gallery in Brooklyn, and The Museum of Drawing in Laholm, Sweden. As a current co-Director of Tiger Strikes Asteroid in Brooklyn Hoving  has had the opportunity to curate several exhibitions. Her curatorial projects and her own work have been written about in publications such as The Huffington Post, Hyperallergic, Two Coats of Paint, The Bushwick Daily, and The Philadelphia Inquirer, among others.