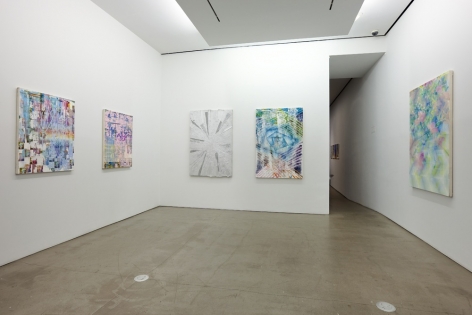 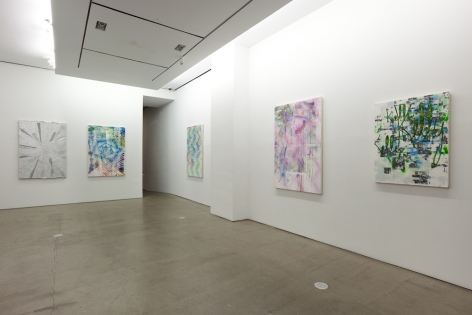 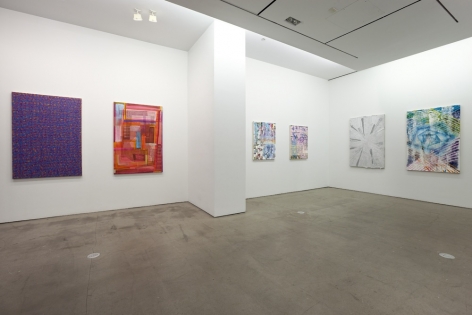 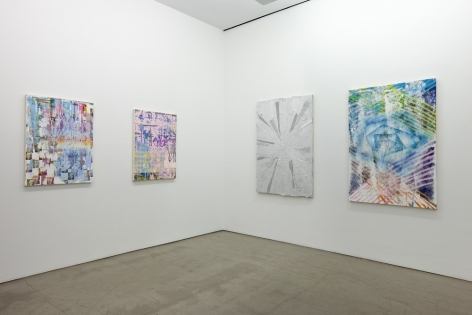 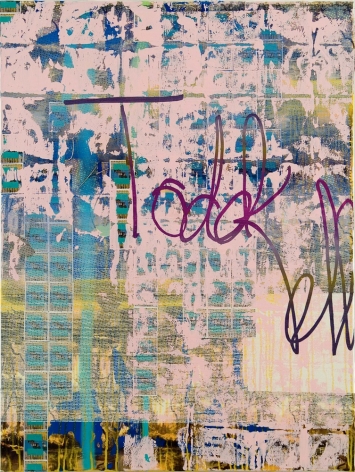 Asya Geisberg Gallery is pleased to announce “Signature Paintings,” an exhibition by New-York based artist Todd Kelly. In his new series, Kelly uses his name as a springboard for painterly experimentation. Kelly manipulates the letters as a compositional structure, sometimes as an exaggerated logo, a half-buried talisman, or altered beyond recognition. Inspired by a non-hierarchical approach to art history and diverse sources such as architecture, graffiti, and graphic design, Kelly takes the viewer on a journey through modes of abstraction, engaging painting as physical and philosophical space. In his paintings, Kelly provokes us to ponder the creative mechanism behind his work. Layers of brushwork, drips, spray paint, stencil, and collaged elements culminate with a surface of parallel dotted lines. Sometimes, large areas of paint cover the painstakingly-applied marks, in a victory of expressionism over control. The delicate uniform marks form a pattern within the picture plane, and are a second form of “signature.”

In Scrim Painting I, a zigzag of diagonal lines covers all but the top edge of the painting. Made of finely nuanced gradients of pinks, the pattern is a geometric extension of the veil. But while the veil both covers and beckons with its seduction by suggestion, the lines also call to mind a hard-edged grated fence. Beneath are lush jabs of paint, insouciant dots of spray paint, and washes of color. Buried deepest is the negative space of the artist’s initials - a whisper compared to the manic activity on top. Ultimately, as the signature of the artist becomes a faint echo, the ego is effectively erased.

In Untitled (Leaves), actual leaves have been adhered to the canvas, as if to point out the old saw about seeing the forest for the trees. On top of the precise fine lines is a splotchy pink layer - as if a drunken rock star had lost control in an elegant hotel room. Untitled (Leaves) is what we see midway through the crash and burn - the starched linens unfurling, the sconces still intact, the ashtray spilled. The hours of careful work required to complete lines of equal length and distance, with quasi-scientific concern for color, compete with a Dionysian expression of id. As Kelly remarks, “the eye switches back and forth between illusions deciding which to land on.”

Originally from Michigan, Todd Kelly studied architecture, before taking up painting as a career. He earned an MFA in 2000 at the School of Visual Arts and a B.A. in painting at Anderson University, IN. Kelly lived in London from 2003 to 2006, where his work was featured in the 2006 Jerwood Painters Exhibition as well as many group exhibitions. In 2010, his work was featured in “Crowd Scene,” an Artforum Critic’s Pick. Kelly lives and works in Brooklyn, NY. 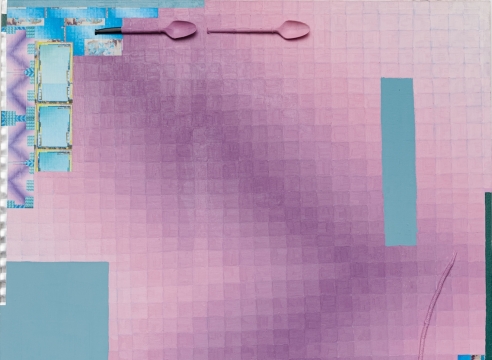